What do M.I.T. Researchers and the E-bike Industry Have in Common?

I have to admit, I was highly skeptical of this wheel and its technology. Since opening Voltaire Cycles in 2015, we’ve heard from many crowdfunding contributors and investors to this project called "The Copenhagen Wheel". For a few years, it appeared that the project had all but completely stalled. Early testing of the technology proved to have many problems - none of which could be fixed easily.

Since 2009, there has been quite a bit of hype around a talented and forward-thinking group of engineers out of M.I.T. in Cambridge Massachusetts. They've been working on a new powered hub wheel that would revolutionize the e-bike industry.

This past year at the 2017  InterBike conference in Las Vegas, after a lot of rumor (of which most of it erroneous), we got to fully test the Copenhagen Wheel on a number of different bike platforms: road bikes, commuter bikes and mountain bikes. Looking at the wheel up close, it's as neatly compact and engineered as a state-of-the-art audio system. The hub has a small port for charging next to a small round disc which swivels to power-on the unit. Once on, you control the power through an app installed on your smart phone.

The app is ingenious with four different power configurations: Smart, Eco, Standard, Turbo. Each setting is easily adjusted with a swipe of your finger. My initial test ride at the conference was on a vintage Raleigh road bike.  After receiving a brief tutorial using an iPhone app designed to manage the wheel by a bBluetooth connection, I was off and pedaling into the sunset. My first reaction was “Wow”. My second reaction was to vocalize my first reaction with vigor. "WOW!”. This was a highly intelligent and intuitive technology. It features some of the latest technology influencing the robotic industry.

What immediately struck me was that there was no exposed battery, no controller, no throttle, no dashboard console, and no crazy tangle of wires.  It is marketed as delivering up to 300w of power assist in the confines of that little red disc. It's operating range is around  30 miles. Once pedaling, the unit senses your speed and cadence and begins to offer power assistance to the wheel. At first, it seemed to be out of sync with my cadence but within a few strokes, it corrected itself and suddenly we were one!

I was immediately hooked and so was our group. We signed up to be a Hub Partner for Superpedestrian Inc. - the company that has brought the product to market -  and have now received our first demo model.

We installed the unit on a REID Ladies 7-speed Esprit.  I took it out for a couple of rides around Verona and can honestly say that this is my favorite conversion alternative on the market. The phone APP remembers your settings and teaches itself as you ride. At the end of the ride, it will display a map of your course, along with useful statistic about your ride but my favorite part of the wheel is the regenerative braking feature which is activated by reverse pedaling. Simply begin reverse pedaling as you start coasting down a hill and you will be engaging a secondary generator which re-charges the battery! 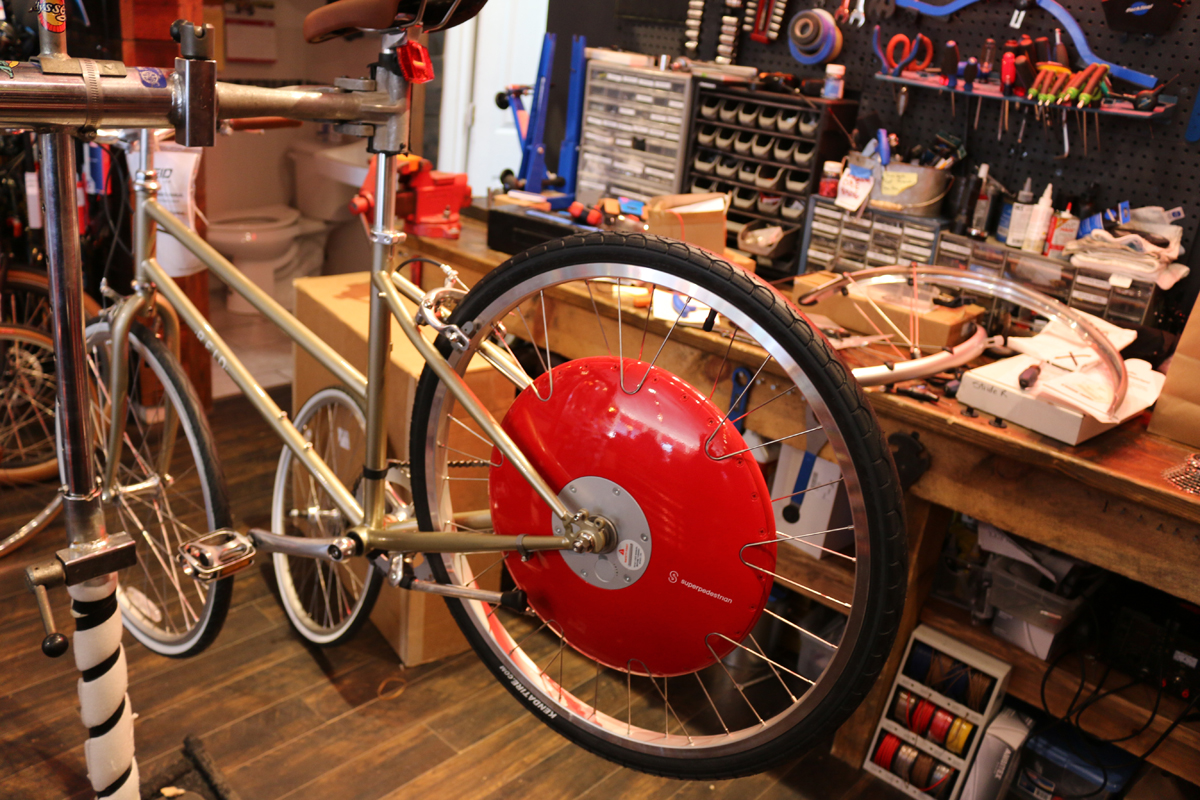 This Copenhagen Wheel comes in two rim sizes: 26” and 700c/29"  and three width sizes. There are also gearing options to choose for your particularly bike. If you have a single speed or a 10 speed, there is a variation for you. The installation is far simpler than any other conversion kit which makes it a no-brainer when thinking about converting a bike to electric.

This is an extremely affordable conversion alternative for anyone who loves their bike but wants to add the electric assist without a lot of fuss around battery placement, motor types, and grip reconfiguration for dashboard and throttle assembly.  At $1499.00 it’s a tough not to want one for my own vintage Schwinn touring bike.

Come take a test ride at The Voltaire Cycles store and you’ll receive an additional discount on the purchase of wheel and bike. If you are ordering online, use the code ELECTRICSPOKES for credit and benefits. As always, we encourage everyone to adopt more sustainable modes of travel. E-bikes are an excellent alternative to the automobile. Ride far - and ride free.